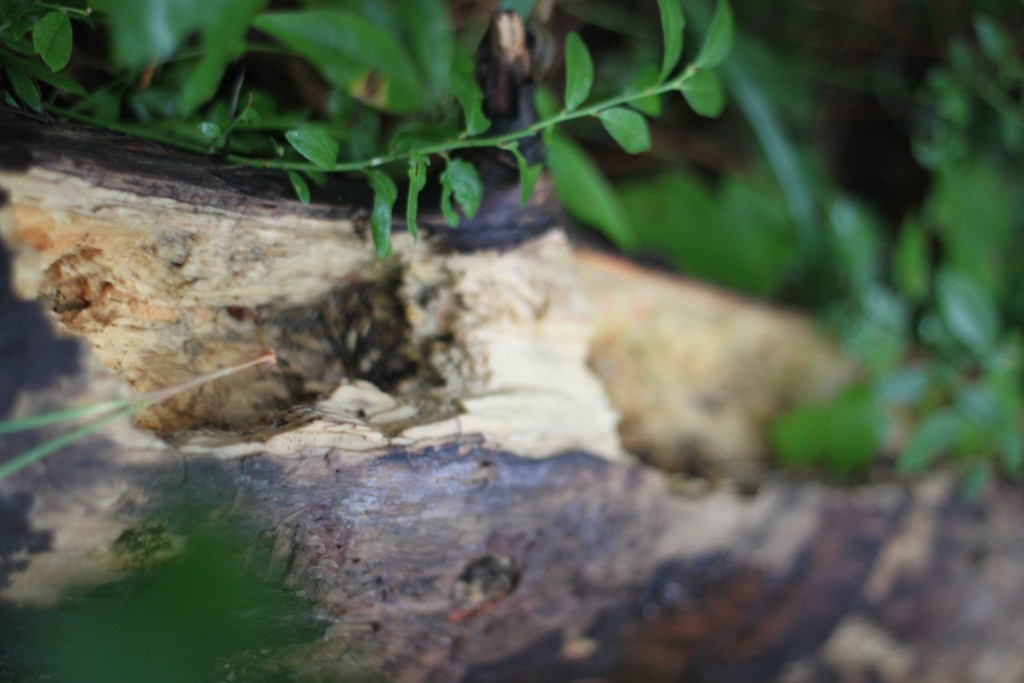 At first I didn’t realize it was a woodpecker making all that noise.

When I heard the tap-tap-tapping sound overhead I didn’t give it much attention. I assumed our landlord must be home, and that the footfall of her shoes was descending through the ceiling.

Of course that wasn’t the case at all. We were not in our cramped English basement, looking out on DC’s Rock Creek Park, anymore. We had arrived in Wisconsin’s Northwoods a week earlier, and now lived below towering conifers and beside Big Saint Germain Lake, or Big Saint, as I heard the locals call it. I had tried to interpret the stimuli of my new environment with the knowledge of my old one. There wasn’t someone going about her business on the roof over the living room, but something.

A woodpecker is my guess.

There are signs of them everywhere—the persistent thud of their beaks chipping into trunks and the holes they leave behind. Some of those openings are small, like a drill with a slender bit bored straight in and out, again and again, to form precise rows, turning the bark into an incomplete cribbage board. That’s probably the work of the yellow-bellied sapsucker. They tap the trees, wait for sap to leak out, and then lap it up with their tongues, eating the bugs gathered there.

But some of the holes are huge, jagged-edged rectangles. Not long after arriving here, my husband Greg and I left for a week of weddings, and the trail that leads between the house and lakeshore was clear. When we came back a large tree had fallen across it. The bark had been razed in big patches, and the trunk was full of gaping, brutal openings, with strata of wood exposed and sticking out in all directions.

Some of those holes might have been made by the pileated woodpecker. That’s the biggest woodpecker in Wisconsin. National Geographic shows its size in comparison to a tea cup, which the pileated woodpecker would easily overturn. It’s about the size of a crow, and mostly black, but on its head there’s a streak resembling a red mohawk. Black and white stripes streak its face, like a zebra, and the males have red mustaches beside their beaks. They look a bit absurd—as though they’ve dressed up in a playful disguise or are fans who painted their faces for a football game—but those little animals can do a lot of damage.

Sometimes they carve into utility poles and houses until it’s destructive, and in Wisconsin you can’t hunt them for game but you can get a permit to kill the birds if they cause damage. You can also block them, distract them, or get rid of whatever attracted them in the first place, which is a far better approach than shooting them.

I don’t think we need to do any of those things, because whatever first brought that woodpecker to our roof didn’t hold its attention long. It hasn’t been back, and I’m not sure why it came. Sometimes woodpeckers hammer away like the one on our roof did because they’re excavating rotten wood to create their home for the year, one they’ll later abandon and other animals will use. Sometimes they do it to attract a mate, which they stay with for life. Sometimes they are looking for food, or pushing food they’ve already found into the crevices of a tree so they can retrieve it in the winter.

But other times, these huge woodpeckers thrum their beaks against a surface as a way of defending their territory. The pileated woodpecker isn’t migratory. Mates occupy large territories and don’t welcome others of the same species into their space for most of the year. Sometimes when they drum against a roof or a chimney, it’s a way of announcing to the forest, “I’m here. This is my home.”

For now the forest, the roof, and the house underneath it, is our home too.

We moved here from DC and will only stay until the winter, when we plan to migrate west. Around the time I first heard the woodpecker and mistook it for our previous landlord a thousand miles away, a cashier at the grocery store asked if I was a local. She was trying to figure out if we had a loyalty card, or if we were weekenders passing through. It’s a simple question, but I still was unsure what to say. I didn’t know if I was preparing to leave or preparing to stay, since Greg and I have been doing both at the same time, settling in for our five months here while getting ready for our move five months away. I feel like we’re straddling a door with one foot on each side, and it’s made me unsure how to connect to this place. Should I think of it as our home or a place to stay? Is there a meaningful difference?

When you leave the place you’re from, it can be hard to relate to the places you go. I’ve never lived anywhere I didn’t plan to leave. When I meet people who have stayed where they are from, I’m simultaneously confounded and envious. Greg and I have been transient as long as we’ve known each other. Sometimes I’ve felt at home in a place I didn’t feel I’d earned the right to claim, like the Seoul suburb we lived in after college, which we knew we’d leave within a year of arriving but were profoundly attached to nonetheless. Other times I haven’t felt connected to a place with the depth I desperately wanted to, like the Hungarian town we left Korea for.

But this place is different. Greg and I won’t even live in Saint Germain for a year, but it’s a family cabin we’ll return to throughout our lives. We may never have a single place that is undeniably and irrevocably home. And I suspect where ever we go, we’ll feel a sense of connection with the trees, the red bridge that traverses the creek, the lake water choppy with waves and still without them, the drumming of the woodpeckers and the hole-riddled wood they create. I bet it’ll always be a place that informs our sense of who we are and how we want to live. If that’s not something worth calling home, I’m not sure anything is.

Oh, and a cool thing I read while writing this:

Martha Harbison’s Case History: The long and torturous tale of how a style guide came to be, for Audubon, about the strange world of ornithologists attempting to agree on whether common names for birds should be capitalized. And really the whole Audobon website, which it turns out is full of great and quirky reads, even if you can’t identify bird calls and still aren’t sure how to pronounce pileated.